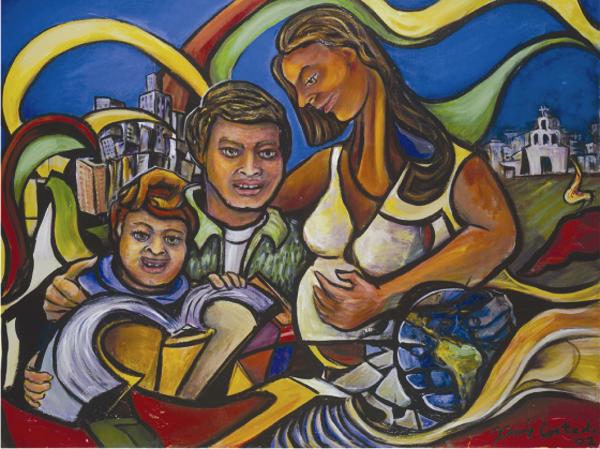 Xavier Cortada, keynote speaker at the Heartland Latino Leadership Conference, painted “Familia Unida” for the event. The painting will go on display at El Museo Latino.

Looking at what it means to be Latino

The concept of being both Latino and American came to life Friday with a colorful slide show of artwork in a Doubletree Hotel ballroom.

Xavier Cortada, a Cuban-American painter, attorney and activist based in Miami, spoke to more than 500 people at the third Heartland Latino Leadership Conference.

Cortada, the keynote speaker, spoke about a united family where Latinos become a part of the American tapestry.

The different art pieces that he showed represent “issues of cultural identity and how we negotiate identity as immigrants in America,” Cortada said. “Being Latino and being American, being both and being neither.”

He says he uses art as a vehicle for communication.

Cortada showed a series of his paintings. The main one depicts Cortada as a member of a fraternity at his alma mater, the University of Miami, in a toga. He also is wearing a Mexican sombrero despite the fact that he is Cuban.

Cortada said the painting is representative of the struggles that one faces with identity.

“We as a society, as we travel, how do we capture our culture and our cultural identity in Omaha, Miami, Los Angles?” Cortada asked the crowd. “The beautiful thing about Latino culture is that it is as diverse as the world.”

The daylong conference – meant to help those in the Latino community help one another gain greater leadership, economic and education skills – underscored the growing power of the Midlands’ burgeoning Latino community.

Among those at the Latino conference were Gov. Mike Johanns, U.S. Sen. Ben Nelson, Omaha Mayor Mike Fahey and Omaha Archbishop Elden Curtiss. Event organizers asked Cortada to paint one of his murals especially for this year’s conference.

The painting, “Familia Unida,” shows a family trying to strike unity between its cultural heritage and a new urban setting.

The painting will be on display at El Museo Latino, 4701 S. 25th St. Audience members received free posters of the painting.