In the permanent collection of the Museum of Art and Design

A solo exhibition by Xavier Cortada

In the permanent collection of the Museum of Art and Design

After Cuba’s historic protests in the summer of 2021 where thousands took to the streets to demand freedom, patria y vida (homeland and life), Cortada feels that Pope John Paul II‘s 1998 message to the Cuban people, “no tengan miedo (have no fear),” still resonates. Twenty years after its original exhibition, and in commemoration of Hispanic Heritage Month, Cortada presents “No Tengan Miedo,” the virtual exhibition below, and his triptych “Fearscape | Artículo XIII | Alumbron” at the University of Miami 2021 Faculty Exhibition at the UM Wynwood Gallery from Oct. 6 to Nov. 9, 2021.

"When I created these works 20 years ago, they heralded the changes in Cuban civil society being ushered in by the 1998 papal visit," said Cortada. "In the ensuing two decades, my optimism for a free Cuba waned... that is, until the #PatriaYVida protests a short few months ago: ¡Viva Cuba Libre!"

In 2001, Xavier Cortada exhibited “No Tengan Miedo” a solo show presented by the Latin American Art Museum in Miami. Through his paintings, assemblages, and conceptual works, Cortada explored the impact of Pope John Paul II’s historic visit to Cuba on the third anniversary of his trip. The exhibit contains paintings created immediately after the artist’s first travels to the island – an 8-hour charter trip to hear the Pope’s Mass, and those created thereafter.

Cortada traveled to the Vatican in February 2000 to meet the Pope as one of 600 artists and cultural figures to participate in the Jubilee Day for Artists. Two months later, he returned to Cuba for the second time to meet family and attend a packed Sunday Mass in his family hometown of Nuevitas, Camaguey, a small fishing village in Northern Cuba, accompanied by his father.

“The church itself was in disrepair, it needed help and an infusion of cash,” he said. “But what was in those pews resonated with energy. It gave me hope for an island that has been stripped of its morality for 40 years.”

As a pioneer in the use of the Internet for collaborative art-making, Cortada also made “No Tengan Miedo” a virtual exhibition on his website, and is replicated from its original below.

“IT CHANGED THE PARADIGM,” OUR SUNDAY VISITOR 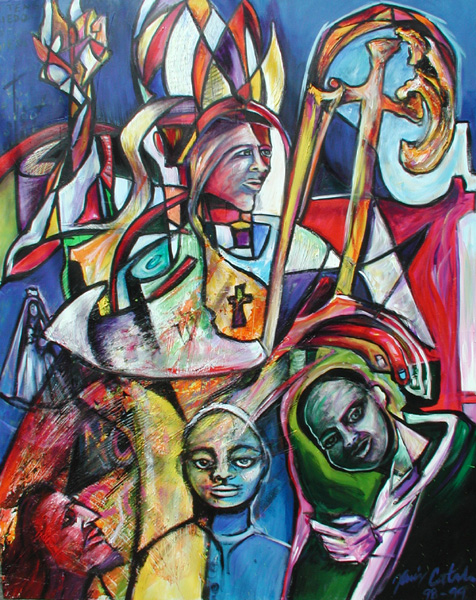 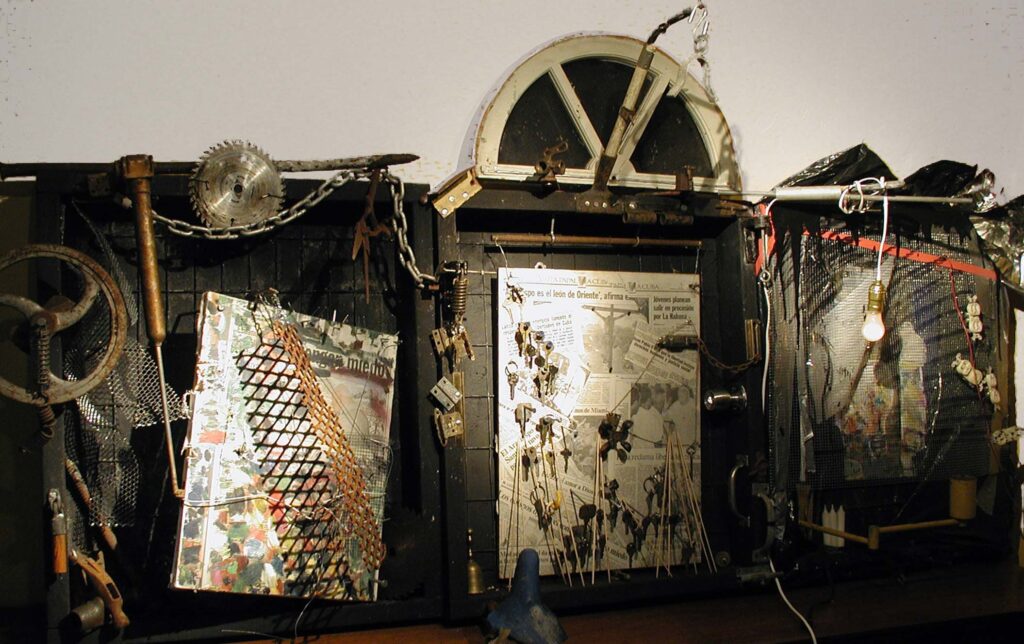 Xavier Cortada, “Fearscape | Articulo XIII | Alumbron” assemblages, 2001 (In the permanent collection of the Museum of Art and Design Miami-Dade College).

Previous
Next
SEE THE GALLERY

Previous
Next
SEE THE GALLERY

"It Changed the Paradigm"

By Tom Tracy,  West Palm Beach
Published as the cover story in Our Sunday Visitor, February 11, 2001

Last April, Miami artist Xavier Cortada completed a circle in his life when he made his second visit to Cuba.

Cortada accompanied his father to his hometown of Nuevitas, a fishing village in northern Cuba. It was there father and son witnessed a Sunday Mass that was standing room only. It was also the only place they saw hope in Cuba.

“The church itself was in disrepair, it needed help and an infusion of cash,” he said. “But what was in those pews resonated with energy. It gave me hope for an island that has been stripped of its morality for 40 years.”

In 1993, Cortada made a career change when he left his teaching position at a Miami university to dedicate himself to art. But the 36-year-old Cuban-American also underwent a spiritual change three years ago this month when he joined a Florida pilgrimage to join Pope John Paul II at his closing Mass in Havana.

“I would not have visited the island except because the pope was going, that was my ticket,” said Cortada, who grew up in Miami’s Little Havana and attended Gesu School in downtown Miami.

“The impact of the pope’s visit was it gave me personal invitation to travel to Cuba, and it also gave Cubans (in Cuba) the invitation to carry their banners in the plaza in what at that time was the ‘pope’s plaza.’”

The Latin American Art Museum in Miami featured Cortada’s impressions of the papal visit to Cuba in an exhibit, “No Tengan Miedo (Have No Fear), which concluded Jan. 27. It can also be seen on-line.

The exhibit — which takes its name from the pope’s remarks about Cuba — featured works created immediately after the artist’s first visit to the his parent’s homeland during the 8-hour charter trip sponsored by the Florida bishops. It was organized for the closing of the papal visit Jan. 21-25, 1998.

Have No Fear consisted of paintings — Cortada’s traditional medium — as well as conceptual pieces featuring objects which capture what Cortada sees as the “tragedy of Cuba.” They include course, raw, rusted, dangerous items such as blades, scissors and metal wiring.

The former faculty member at the University of Miami Dept of Psychiatry and director of the Juvenile Violence and Delinquency Prevention program there, said he thought it was appropriate to look back on the papal visit to Cuba and consider its impact — on Cuba and Cubans in the diaspora.

“I think the pope created these small places for people to be able to begin rebuilding Cuba and through a re-encounter with God,” said Cortada, whose work of religious imagery was the subject of an exhibit last year at Miami’s St. Thomas University.

“It used to be that prior to the pope’s visit, you would only assemble (in Cuba) for state reasons, to go to the mandatory rallies of Fidel,” he said.

“After the pope’s visit, there was a spiritual reason to gather, and you begin to build a civil society and that is the legacy of the pope in Cuba.”

Cortada was not just moved externally by the Cuba pilgrimage. The trip facilitated a rediscovery of his religious roots. His own concept of Cuba was already intertwined with Catholicism because of his upbringing. But through the years, Cortada said, especially while a college student, he experienced a disconnect.

“It was a beautiful experience in Havana in 1998 where the pope gave me permission to be there. He gave (me) a connection, so as an adult in Nuevitas I could literally shake hands with the people I used to write letters to as a kid.”

Cortada’s on-line bio says he works primarily in acrylic and oils on canvas, and has created numerous murals and has a large portfolio of drawings.

With both his father and uncle practitioners of art, Cortada comes in part from the tradition of Cuban modernism. His work is also influenced by the modern world, advertising, the iconography of estampitas religiosas (saint or prayer cards), TV cartoons, his travels, and, he points out, the stained glass windows of Gesu Catholic Church in Miami.

If the pope’s words, “Have No Fear,” had an impact on Cortada personally; it also served as a stepping stone for the artist to take a chance and experiment artistically with conceptual art.

One, called “Revolution,” is a toilet plunger on wheels. Another, “Faith Fuse Box,” show a device comprised of electrical extension cord plugged into a set of novena candles. In an island where not much culture, material or structural society exists the only thing people can plug into is faith, Cortada points out.

“Each of us have a different way of communicating with God, but the idea is if you are in Cuba and you want something, it is through faith.”

Cortada’s art work owes its roots to the need to communicate across borders, cultures. After passing the bar, the Floridian joined the University of Miami faculty and held a heavy schedule of speaking engagements in Latin America and Africa on juvenile justice matters.

During a visit to children at a South African village in 1994, Cortada found he couldn’t speak their language. “So I did a lot of drawing for the kids and they started drawing back. I realized art was the universal language I could use to communicate with others.”

By 1997, Cortada was a full time artist with international artistic and humanitarian credentials. The U.S. State Department recently presented him with their Millennium International Volunteer Award for his work with children in Latin America in Africa.

In February, he was invited to attend the Jubilee Day for Artists at the Vatican. He was one of only 600 artists and cultural figures invited from around the world for the celebration. While there, Cortada prayed from the Bernini papal altar during the Mass.

Currently, Cortada is focused on studio-based artistic projects, including a stations of the cross-inspired series about Cuba. The first of the 14 large canvases he painted (XII Paredon) was exhibited in “Have No Fear” and references the execution of political prisoners during the early days of the Cuban revolution.

In his piece, “El Semillero: Libertad 53-Embargo One,” Cortada puts the political question of the U.S. embargo against Cuba into perspective as it related to the papal visit.

Describing himself as a kind of moderate on the question of Cuba and foreign policy, Cortada points out some in the Cuban-American community remain critical of the pope for calling for an end of the embargo.

“It is one of those hot-button topics that completely precludes the discussion,” he said. “For those people who want to block out what the pope said with the embargo should remember this: He said the word embargo once, and liberty 53 times.”

From the vantage point of three years later, Cortada believes the pope’s visit to Cuba accomplished much. He blessed, validated the people in Cuba, and those who wanted to visit the island for the first time.

“He said, ‘If I can come to this island, so can my flock.’ After the kind of opening that has happened, it changed the paradigm. That is what this exhibit tries to convey.” 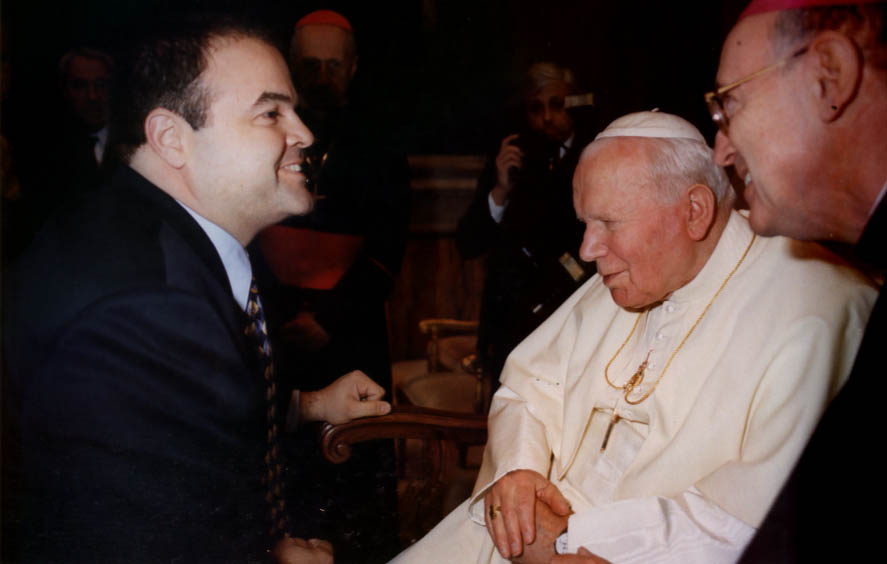 Xavier Cortada is an artist and professor of practice at the University of Miami (with secondary appointments at the School of Law and Miller School of Medicine). Particularly environmentally focused, the work Xavier Cortada develops is intended to generate awareness and action towards issues of global climate change and social justice. Over the past three decades, the socially-engaged artist has created art at the North and South poles and across 6 continents, including more than 150 public artworks and dozens of installations, collaborative murals and socially engaged projects.

Cortada was born to Cuban exiles in Albany, New York and grew up in Miami from the age of three. He holds three degrees from the University of Miami: Bachelor of Arts, College of Arts and Sciences (1986), Master of Public Administration, Miami Business School (1991) and Juris Doctor, School of Law (1991). Learn more about Xavier Cortada at cortada.com.