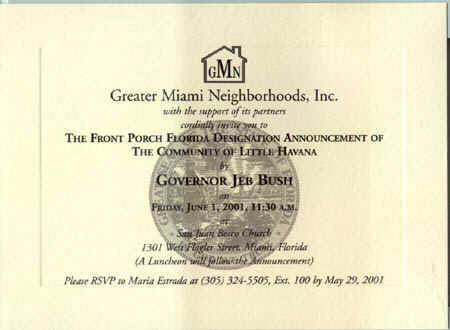 The “Front Porch Conversations” collaborative mural will capture the conversations people would have had about the Little Havana Community. The completed mural was to be unveiled on June 1st, 2001 from 11 a.m. to 1 p.m. at Little Havana’s San Juan Bosco Church in Miami, Florida.

Governor Jeb Bush has designated Little Havana as a Front Porch Initiative community. The initiative is a grass-root, bottom-up revitalization initiative that focuses on the family and empowers residents to define and resolve neighborhood problems through technical assistance.

On June 1, 2001, during the Initiative’s launch, the “Front Porch Conversations” collaborative mural created by Miami artist Xavier Cortada will be unveiled. The collaborative mural, sponsored by Greater Miami Neighborhood and its partners, was created using drawings by students from Riverside Elementary School.

To encourage and support Florida’s urban citizens in their effort to preserve core neighborhood values and to assist them in identifying and strengthening their existing community assets.

To foster an atmosphere of cooperation and understanding in neighborhoods, which empowers neighbors to create an oasis of hope within their communities through committed local activism.

To work as an Agent of facilitation by uniting individuals; neighborhoods; and public and private resources as collaborative partners with a common goal of re-claiming Florida’s urban communities.

To promote and celebrate neighborhoods that have successfully revitalized themselves, as role models and shining examples of what all Florida urban communities aspire to become.