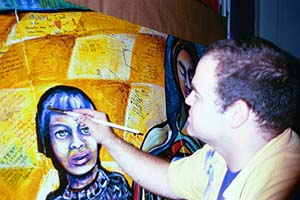 USAID, Washington, D.C. teens and Artist Xavier Cortada, teamed to create an HIV/AIDS mural with a message that will go around the world. The mural, which captures USAID’s commitment to a holistic approach to HIV/AIDS prevention, care and support efforts, will be developed into a poster for dissemination to nearly 10,000 participants at the XIII International HIV/AIDS Conference in Durban, South Africa in July.

The participatory event was held on April 28, 2000 at Woodrow Wilson Senior High School. The “Tigers Against AIDS,” a peer counseling group sponsored by school nurse, Cynthia Carney, led sessions with their fellow students promoting prevention and testing and admonishing them to take HIV/AIDS seriously. “Washington, D.C. has the highest rate of HIV in the country,” peer counselor Sarita Copeland told participating students. “There are people in this school who are walking around with HIV and don’t even know it. We all need to be tested to protect our loved ones and ourselves.” One student participant spoke of the ordeal he’d gone through helping to care for a loved one with AIDS.

The centerpiece of the event was the 4′ x 9′ acrylic-on-canvas mural designed by Mr. Cortada, in consultation with Synergy Project staff. Rendered in a style that captures the transparency of stained glass windows and reflects the influences of the Cuban School of Modern Art, it features colorful but thought-provoking images of individuals affected by or vulnerable to HIV/AIDS. The award-winning, Miami-based, Cuban-American artist/lawyer/activist, who sees art as a tool that can influence the way people view social issues and act as a catalyst for their involvement, shared his vision for the mural with the students, encouraging them to think deeply about the impact of HIV/AIDS. He then invited them to write their messages on torn pieces of paper using colorful markers. Tapping into Wilson’s cultural diversity, Mr. Cortada encouraged students to express themselves in other languages, including urban slang. He reminded them that their words would find homes in clinics, schools, and offices around the world. The peer counselors collected the messages after each session, which Mr. Cortada collaged on to the canvas, creating a background to the figures reminiscent of the AIDS Quilt.

Dr. Paul DeLay, Chief of USAID’s HIV-AIDS Division, and Synergy Project staff participated in the sessions, talking with the students about the prevalence of HIV/AIDS worldwide and its impact on the developing world. As a special treat, Ben & Jerry’s Homemade, a company known for social responsibility, provided ice cream for the students.