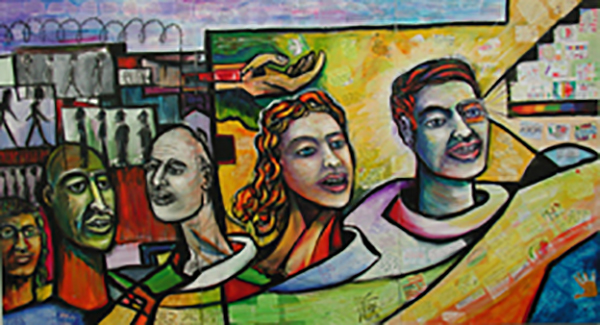 Miami artist Xavier Cortada will travel to Ireland from October 13 to the 23rd to create a collaborative mural with and for the people of Northern Ireland. Cortada will facilitate conflict resolution discussions among 132 Protestant and Catholic youth from Northern Ireland who traveled to America during Summer 2000 to participate in the Children’s Friendship Project for Northern Ireland. He will do this in small groups throughout different cities and at the groups reunion in Dungannon, Northern Ireland on October 21st, 2000.

Throughout his stay, Cortada is also schedules to meet with several leaders and community stakeholders who can give him a good feel for the diversity of cultures in Northern Ireland and their origins. Some of these meetings are being arranged through the sponsors and the Northern Ireland Millennium Company.

Minister of Arts and Culture to receive mural

During the group’s reunion, the mural will be presented to the Minister of Art and Culture so that it may be preserved permanently in Northern Ireland for future generations to enjoy. The mural will then be displayed as part of an exhibit promoting diversity and understanding. Posters of the completed mural will be disseminated to children in schools across Northern Ireland.

US Department of State Sponsors the Project

Mr. Cortada’s mural project is sponsored by the United States Department of State, as a follow-up activity to the Millennium International Volunteer Award. Mr. Cortada was the Millennium Award winner from Miami.

The activity supports the International Education Policy issued by President Clinton on April 19, 2000. To be implemented collaboratively by the State Department and the Department of Education, the policy renews and strengthens the federal government’s commitment to support international education in the broadest sense, and calls on U.S. educational institutions, state and local governments, non-governmental organizations and the business community to make a similar commitment. Mr. Cortada is volunteering his time and donating his artwork.

Mr. Cortada uses a special technique that incorporates participant’s actual writings and drawings into his murals. Each person is asked to express himself or herself by writing or drawing on a separate piece of paper. These messages are then glued into three canvas panels around an image designed by Mr. Cortada himself. Through this method, voices are united by common concerns.

Every participant is encouraged to write (preferably with permanent ink) or draw a message on one side of a piece of white paper no larger than 3 inches by 4 inches. The messages (click here to see photo of messages) will focus on how youth have learned to respect or celebrate diversity.

Lessons learned to be applied in Northern Ireland and Miami

The youths’ insight and lessons learned will reach all those in Northern Ireland who see the mural and/or its reproduction as a poster. Moreover, upon his return to Miami, Cortada will share the lessons learned in Northern Ireland with high school students in his hometown of Miami, Florida. He will do this through Master-Peace International, an arts-based program sponsored by Miami-Dade Art in Public Places.