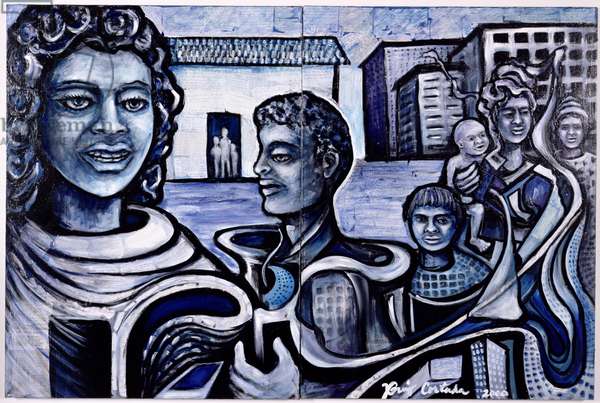 Launching of the Art in Public Places’ PATH (Public Art Transforming Housing), a collaborative project with Miami-Dade Housing Department and the Miami-Dade Police Department aimed at eliminating drugs in nine public housing sites. Dedication Ceremony and Kick-off Celebration: Youth from Wynwood working with artist Xavier Cortada unveil their PATH projects as they unveil the grand opening of their new space, the Castle and kick off a year of PATH. July 28, 1999, 4 pm, at 225 NW 35th Street, Wynwood, Miami, FL

Home is where the art is–Kids from public housing draw on experiences, By Gigi Barnett, The Miami Herald, Miami, FL, August 1, 1999, in

I would like to briefly summarize the activities I engaged in the implementation of the Wynwood PATH program.

The first session began with an introduction of the artist and an overview of the program. It was followed by a slide presentation, where I showed the youth other collaborative art projects I had engaged in throughout the years.. This included work I had facilitated in places like Geneva (AIDS mural) and Philadelphia (Anti-violence mural) to the Art in Public Places mural in Naranja’s public housing site. Later, the kids were asked to draw a self-portrait and write a brief comment about themselves.

The sessions proceeded with youth sketching pictures of themselves and their community. Each was given a sketchpad notebook and coloring sets. They drew some pictures of how they would like to see some areas of their neighborhood be transformed. They focused on garbage, drug/crack houses, and areas that needed to be beautified. They also did some self-portraits about their favorite things.

During other sessions, the youth used acrylic paint to transform some aprons they were given into works of art. The aprons were all based on the theme of houses and housing. Some even used paint to decorate their painter’s caps. One afternoon, the group went around the housing site to look for discarded material. They brought pieces of a stove and other found objects into our makeshift studio and used paint to transform them into flowers, and abstract art pieces.

During several sessions, youth were asked to read through newspapers and magazines looking for images. They were broken into teams and asked to develop a story based on the pictures they had selected. Back and forth they would brainstorm and exchange ideas before creating the story and sharing it with the rest of the group.

Before and after these sessions the youth were engaged in educational discussions focused on prevention activity. In a participant-driven and free-flowing format, the topics generally addressed the following issues: self-esteem building, learning how to communicate and resolve conflicts, consequences of drug use and abuse, topics on gangs and violence, and discussions on neighborhood pride, listening to parents, choosing the right peers, and excelling in school. The youth were even taught about the concept of risk factors and protective factors, demonstrating how the very activities we engaged in protected them from anti-social activity.

One afternoon, elderly from the public housing site were invited to share their life of experiences with the kids. They asked questions on everything from immigration to civil rights. The elderly shared, talking about the pivotal points in their lives and imparting advice on the youth. Other speakers included Officer Lopez, who organized the youth as a Crime Prevention group and worked with housing staff to establish the Castle, a drop-in site for the youth.

In determining what our final project was going to be, we brought together all the interactive concepts, pro-social lessons and artistic techniques learned. Each child would make a personalized shield– one that showed how being involved with the castle would shield or protect them from anti-social activity. These were created with paint on canvas board and mounted on plexy-glass box frames. The group also contributed personal sketches that were collaged into a round canvas, depicting how the group activities protected them collectively. Likewise, they created a triptych of collaged sketches and messages on canvas–some included transcripts of the very words the elderly had spoken.

The art pieces were unveiled at a dedication ceremony for “The Castle”. The youth marched into the building holding up their individual and collective shields and mounting them on the Castle walls. Sealed behind matte medium, the words and drawings created during Summer 1999 would permanently hang there as art pieces, serving as conspicuous reminders of all the lessons learned.