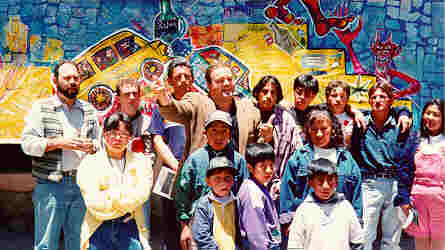 La Paz youth pose with the artist in front of their prevention mural.

During October 1997, XAVIER CORTADA, opened two exhibits: One at Museo de Historia, Universidad Autónoma “Gabriel Rene Moreno,” the Regional Museum of Santa Cruz, Bolivia, and the other at the Museo Tambo Quirquincho, the municipal museum in La Paz, Bolivia, 1997. After his departure, the exhibit continued traveling through Bolivian cultural centers, including the Binational Center in Cochabamba.

Then, Cortada’s exhibit travels to Tarija for the International Festival de la Cultura “Abril en Tarija”, and later to Potosí a/o Oruro for an exhibit in coordination with the Partners of the Americas.