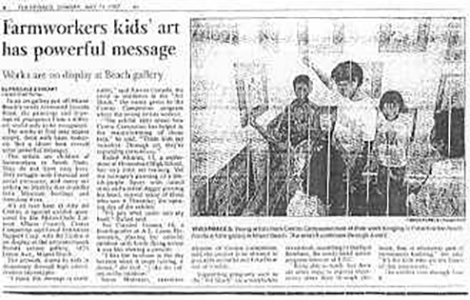 Invite you to the opening reception for

an exhibit of works

by Youth from the Centro Campesino Farmworker Center

The Art Shack: Art as an Agent of Social Change

Art builds a sense of history and context often lacking in disadvantaged communities. According to artist Xavier Cortada, “community art gives people a chance to create a history, establish some tangible landmarks by which to define themselves and express the way they feel about each other.”

The power of art reaches still further into the fabric of community life when blended with an economic agenda. In South Dade, for instance, Cortada is working with LISC, the Metro-Dade Cultural Affairs Council and the Centro Campesino Farmworker Center CDC to establish an “art shack” where at-risk youth and others can go to create and then later sell their art. Art Shack youth unveiled their first mural on February 21 at the Miami Youth Museum, and have exhibits scheduled for May 1997 in the South Florida Art Center and July 1997 in the Cuzco Museum of Contemporary Art (Peru).

The idea is to provide accessible and constructive outlets for the creative energy of community residents. With the proper opportunity and guidance, residents can begin to form a habit of exerting a positive influence over themselves and their community.

In Cortada’s mind, the prospects are exciting. His vision is similar to the reality experienced in other cities where resident-created public art has been used to beautify the physical environment. “When people get together to paint bus benches, buildings and other landmarks, a stronger sense of community emerges,” he points out. This sense of community helps generate and build pride from within the core of the neighborhood. In addition, it captures the attention of outsiders who might think, “Hey, this is the kind of community where I’d like to locate my business or raise my children.”

artcenter / south florida advances and promotes the visual arts in South Florida by providing studios, grant subsidies, teaching and exhibition opportunities to visual artists, and by informing and educating the public about the creative process. The executive offices are located at 924 Lincoln Road, Miami Beach, FL 33139. Their phone is 305-674-8278; the fax is 305-674-8772.

THE ROLE OF LISC SOUTH DADE

LISC South Dade is committed to helping the Centro Campesino CDC in its community-building activity, specifically as it pertains to youth and family development. To this end, LISC has provided on-going support and technical assistance to staff and management in related programs. Moreover, it had helped design and implement the Art Shack, an exciting community-building project targeting at-risk teens in the community.

Through grants and support from its office and the Metro-Dade Cultural Affairs Council, LISC South Dade helped Centro Campesino established the Art Shack–an art-based pilot project where at-risk youth can come and engage in pro-social activity. LISC, as a Community Development intermediary, is committed to this project as a direct way of helping Centro Campesino transform its community, both from a visual/physical and human perspective.

LISC South Dade Director Xavier Cortada has served as the founder and the resident-artist for the Centro Art Shack, working with Centro Campesino staff in designing a project that can reach out to its youth and tap their potential. The Art Shack serves as a way of giving otherwise voiceless kids a forum for self-expression, as well as an opportunity for further integration into educational, social, and activity. Likewise, by addressing these needs, it helps the CDC address the asset management concerns of a housing development threatened by escalating youth anti-social activity.

Through art, these Mexican-American teen-agers are engaged in pro-social activity and are encouraged to better their South Dade community. The Art Shack is physically located in the Centro Villas housing development, the heart of the CDC and its activities. Youth from the neighborhood “drop-in” after school and become involved in a myriad of projects. This intervention’s effect is multi-disciplinary: Youth can use art as a form of self-expression, or to assess and sharpen their artistic talents in pursuit of creative careers. Art can also be utilized as a vehicle to better visually understand a school subject or real-life problem. Centro Campesino has used the Art Shack as a way of engaging some hard to reach and troubled youth and their families to provide them with an array of support services.

As a process, the art is used as a team building exercise. The process is the coming together of diverse individuals to develop a vision and work collectively to achieve a common goal. The merit of this educational process is that everyone is valued for their contribution (diversity is rewarded) and success is based on the ability of the participants to support one another in reaching their goal.

This process also leaves a product—such as a series of paintings or a mural– that serves as a conspicuous reminder that by working jointly the community can meet its challenges. The mural becomes more than then does more than instill community pride. The mural, like a new affordable housing development, becomes the first in a series of tangible steps residents take in jointly rebuilding their community.

Since coming together four months ago, the youth have converted an old “shack” into their studio and youth center. They created a 28-foot mural for the Miami Youth Museum, on exhibit until July. The Art Shack program has been featured internationally on CBS Telenoticias (international Spanish-language news) and the youth have been recognized before the delegates of the State Museum Associations National Conference. They have been invited to exhibit their work at a solo show of the “artcenter / south florida artsite gallery” during the month of May 1997.

For more information about the Art Shack or the exhibit please call Xavier Cortada at LISC or e-mail at xavier@cortada.com.

Centro Campesino is accepting donations to build-up the Art Shack program. If you would like to make a contribution , please contact Eddy Altiné at Centro Campesino (245-7738).