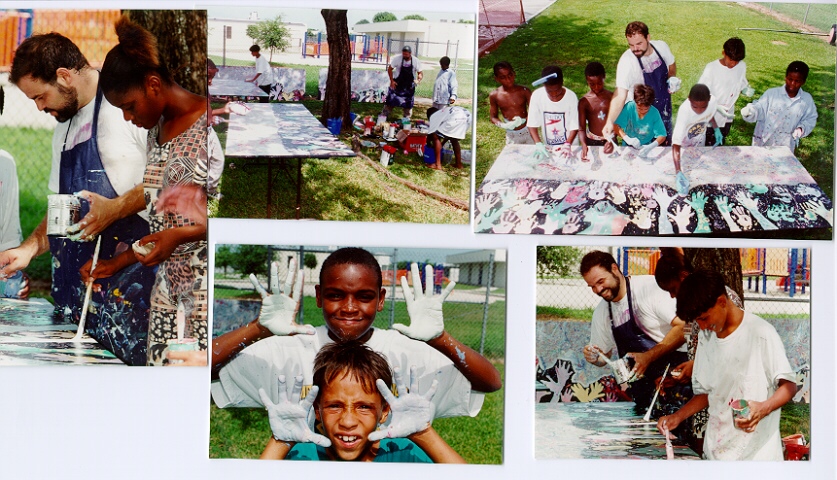 In a world where words often fall short, art can be the answer. That’s the position of South Dade LISC Director Xavier Cortada, who’s bringing life back to beleaguered neighborhoods through community art. As an accomplished artist, Cortada has logged thousands of hours thinking about and practicing community renewal. “Art and the creative process,” he says, “bring people together in a deep and significant way.” In Naranja, for example, Cortada organized a mural-painting project this past August. He rolled up his sleeves and worked with a group of children and adolescents to paint a 24-foot-long mural called Hands: Celebration of Community. The mural, which now hands reaching up to the sky and reaching out to others. When children see it, they see something valuable they have created. They say, “See, that’s the hand I painted, or the finger, or the sky.” They have a sense of ownership and a feeling that they can accomplish anything if they work together. “Community art teaches children and people to respect each other’s diversity,” iterates Cortada. “It also teaches them that each person has a valuable role to play in a larger process.” The idea is that if people learn to interact and work together through art, they can work together to improve their community in other ways too. Such cohesion and teamwork isn’t the only benefit of community art. According to Cortada, art also builds a sense of history and context often lacking in disadvantaged communities. “Community art gives people a chance to create a history, establish some tangible landmarks by which to define themselves and express the way they feel about each other. The power of art reaches still further into the fabric of community life when blended with an economic agenda. In South Dade, for instance, LISC is partnering with the Centro Campesino CDC and the Metro-Dade Cultural Affairs Council to establish an “art trailer” where gang members and others can go to create and then sell their arts and crafts. The idea is to provide accessible and constructive outlets for the creative energy of community residents. With the proper opportunity and guidance, residents can begin to form a habit of exerting a positive influence over themselves and their community. In Cortada’s mind, the prospects are exciting. His vision is similar to the reality experienced in other cities, where resident-created public art has been used to beautify the physical environment. “When people get together to paint bus benches, buildings and other landmarks, a stronger sense of community emerges,” he points out. This sense of community, concludes Cortada, serves to generate and build pride from within the core of the neighborhood. In addition, it captures the attention of outsiders who might think, “Hey, this is the kind of community where I’d like to locate my business or raise my children.” 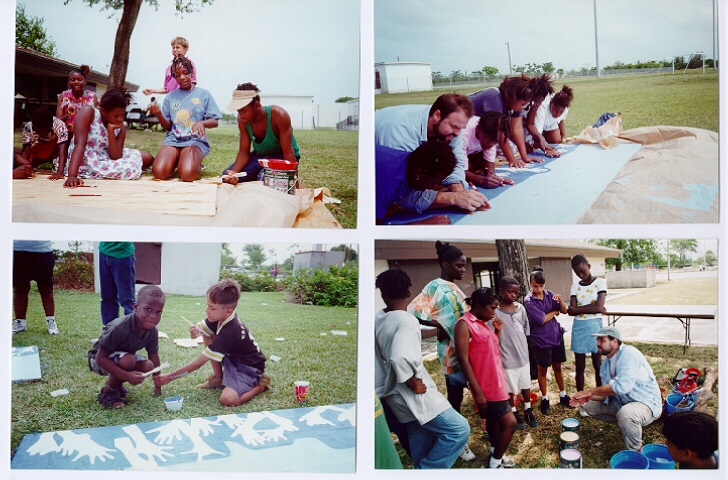 Helping Hands Grab Hold Of Community courierThe Local Initiatives Support Corporation and the Metro-Dade Park Department have partnered with children of the community in the creation of the Naranja Park Mural Project, 14150 SW 264th St. Artist Xavier Cortada, director for the LISC South Dade Development Program, and young artists from the area, have put together a 24-feet by 3-feet mural, which will focus on the bonding of the community and will depict a conglomeration of hands reaching up together to symbolize the “Celebration of the Community.” Naranja area residents came out July 31 to have their hand traced as a part of the mural so it would be completed the following day. The mural was then unveiled and permanently affixed to the wall of the Naranja Park Community Building. Founded in 1984, the Greater Miami LISC is a nationally-based organization that supports and organizes Communiyt Development Centers. The mission of the CDC is to assist local communities in the development of affordable housing, establish economic development and initiate social services.