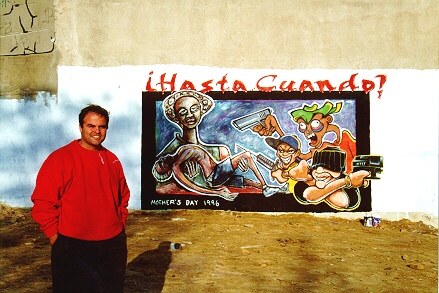 Xavier Cortada before the “Hasta Cuando” Mural in Philadelphia, 1996.

His name was Ram. He was 16 years old. He lived – and died –in Kensington Park, Philadelphia. Earlier this year, he was shot by a rival gang member as he sprayed his name on a wall in this graffiti and garbage-ridden neighborhood.

This Mother’s Day will be a time of mourning for his mother. And a time of fear for the other mothers in the neighborhood, who worry that their own children will die equally senseless deaths in a neighborhood plagued by drug-dealing and violence.

But it will also be a time of hope. This hope comes in the shape of a giant Mother’s Day card that mothers and their teenage children in this neighborhood will paint together on a cement wall.

Though the card won’t fit on any rack in a Hallmark Store, it will be a permanent reminder to everyone who sees it that there must be an end to the drugs and crime that divides this area. The card’s message will read “¿hasta cuándo?” This means “till when?” in Spanish.

Guiding the design of this mural will be nationally-known artist Xavier Cortada, who is an attorney who has worked with youth in juvenile violence prevention programs in Miami, Florida. Cortada, known for his powerful paintings that carry anti-substance abuse messages, has been invited by community leaders in the neighborhood to come help design and paint this unique mural.

Cortada says that the card’s message, “till when” is particularly relevant for both mothers and children in this community.

“The youth ask, `How long are we going to continue being exploited by drug dealers?’ And the mothers ask `How much longer are we going to keep losing our kids and letting our families be destroyed?’” Cortada explains.

He says that creating this mural is a tangible opportunity to join people together and show them that they can take fate in their own hands. Mothers and kids do not simply have to sit back and be victims of the drug culture they live in, waiting helplessly for leaders to change things for them. This mural empowers them to take power back into the neighborhood and make things better for themselves.

Participants will gather on Saturday, May 11th, 1996, to start planning the mural and the painting will take place on Mother’s Day, Sunday, May 12th.

Co-sponsoring this project is Join Together, a national resource center for communities fighting substance abuse. Join Together is located at the Boston University School of Public Health.