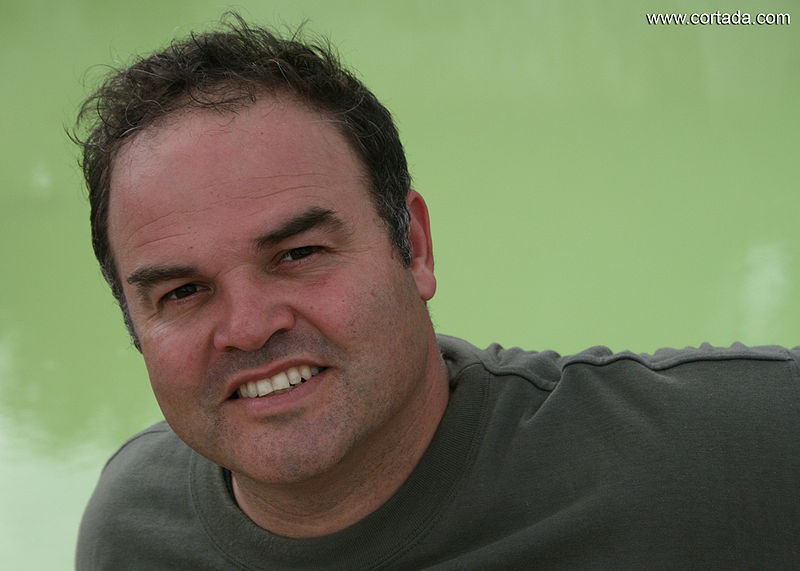 Much of Xavier Cortada’s art practice is oriented toward social engagement and the environment. He has created art installations at the earth’s poles to generate awareness of global climate change: In 2007, while a fellow of the National Science Foundation Antarctic Artist and Writer’s Program, he used the moving ice sheet beneath the South Pole as an instrument to mark time. The art piece will be completed in 150,000 years when the mangrove seedling replica he planted on the moving ice sheet arrives at the water’s edge and symbolically sets its roots. In 2008, he planted a green flag at the North Pole to reclaim it for nature and launch a reforestation eco-art initiative.

Cortada often collaborates with scientists in his art-making:
One example is his work at CERN, the European organization for nuclear research. Here, Cortada worked with a physicist to develop a site-specific art installation that captures the five search strategies which scientists used to find The Higgs Boson particle, confirming the standard model of physics. Five giant banners hang at the Compact Muon Solenoid, a facility where the particle was discovered, 100 m below ground.

He has also worked with a population geneticist on a project that explores our ancestral journeys out of Africa 60,000 years ago. For another project he engaged a molecular biologist to synthesize an actual DNA strand made from a sequence randomly generated by participants visiting his museum exhibit. Additional eco-art projects, conducted with botanists, have reforested mangroves, planted native trees and restored wildflower populations.

Cortada is currently working with scientists at Hubbard Brook LTER on a water cycle visualization project driven by real-time data collected at a watershed in New Hampshire’s White Mountains.

The Miami artist has worked with volunteer groups to produce collaborative art projects, including peace murals in Cyprus and Northern Ireland, child welfare murals in Bolivia and Panama, AIDS murals in Switzerland and South Africa, and eco-art projects in Taiwan, Hawaii, Holland and Latvia.

Corporations such as General Mills, Nike, Heineken and Hershey’s have commissioned his art. Publishers like McDougal and Random House have featured it in school textbooks and publications. His work has also appeared in National Geographic TV and the Discovery Channel.

Cortada, was born in Albany, New York and grew up in Miami. He holds degrees from the University of Miami’s College of Arts and Sciences, the Graduate School of Business and the UM School of Law. The artist currently serves as Artist-in-Residence at Florida International University‘s College of Architecture + The Arts (CARTA).