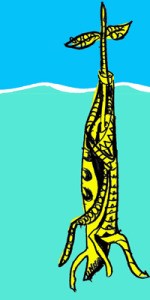 The City of Miami asked Hands on Miami, a not-for-profit whose mission is building community by engaging people in volunteer service, to help its Neighborhood Enhancement Team (NET) offices beautify the Interstate’s underpasses in the Downtown and Little Havana neighborhoods, as well as a flyover in the Allapattah neighborhood. Hands on Miami turned to Xavier Cortada to design artwork for the sites in a way that would make the entire project a cohesive and uniform art piece.

Miami artist Xavier Cortada chose the image of the mangrove tree as the centerpiece of this project to the transform clammy, dingy and dark places beneath Miami’s highways. Cortada decided to recreate the underpass’ natural environment when the first European settlers arrived: a mangrove forest.

Miami is a young City. Instead of painting a full grown forest, Cortada chose to portray the mangrove early in its lifecycle of growth: a sea of floating seedlings readying to set their roots. Mangrove seedlings serve as a metaphor to honor the people who made the journey to Miami and decided to set their roots here. “We’ve all come from different places to make Miami our home,” said Cortada, “much like a mangrove seed washes up and takes root on a Florida sandbar and helps builds new land where new life can take hold.”

The mangrove roots symbolize the residents who have set roots in their neighborhood and built community. “Having this painted forest’s roots spread across these different neighborhoods, depicts our interconnectedness,” stated the artist, “by reaching out to others, we build a stronger community, much like the walking feet of mangrove roots do to build formidable structures and nurture new life.”

Indeed, that is what hundreds of volunteers did on Hands on Miami Day 2004, when they began the transformation of what were once blighted areas. Using 8 foot by 4 foot stencils designed by the artist, Hands on Miami volunteers painted three mangrove seedlings on each of the underpass’ columns. Each seedling was painted in one of 18 colors. The areas around each seedling were painted in blues to simulate the sea and sky. Students from Miami International University of Art and Design then returned to the downtown site to work on the colored seedlings. Using black paint they executed unique drawings Cortada created for each and every seedling.

Together, hundreds of volunteers came together to help transform the neighborhoods into works of art. Using paint, they planted these unique seedlings that will grow into the Miami Mangrove Forest and inspire others to reach out to other neighborhoods in building a stronger Miami.

Portraying the natural world in urban spaces is also important because it reminds us of what was here before all the concrete was poured. As generations and growth transform Miami, we as a people are grounded by nature, the one constant in this ever changing and wonderful city.